Oil-free compressors are most often used in process gas applications. Hazardous, poisonous or simply dangerous gases are usually being compressed and conveyed by our screw compressors. It is critical therefore, that such conveying media be sealed against leaks to the atmosphere or, in the case of gases incompatible with lubrication oils, against leaks into the compressor's lubrication system. Dry gas sealing systems are often applied for such tasks. 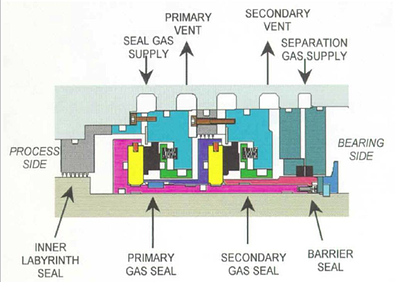 Dry gas seals are mechanical face seals. They consist of a stationary (primary) ring and a mating, rotating ring. During operation, grooves in the mating ring generate fluid-induced dynamic forces, causing the primary ring to separate from the mating ring, thus creating a gap between them. A typical value of the running gap between the primary and mating rings is 3 to 4 microns. A sealing gas in injected into the seal, providing the seal between the atmosphere (or the oil system of the compressor) and the compressor's conveying chamber.  Typically, a labyrinth seal separates the gas seal from the process gas, while a barrier seal, also a labyrinth seal, separates the gas seal from the compressor's bearings and their oil lubrication system. Barrier seals are buffered with gas - typically nitrogen, at a fixed pressure, and vented to the same vent as the seal gas exiting the dry gas seals.

The pressure of the seal gas is controlled, such that it is slightly higher (typically 0.3 bar, 5 psi) than the process gas pressure. Thus, part of the seal gas volume will leak into the process gas, while part of the barrier gas volume will leak into the compressor's bearings and then into the lubrication system, eventually reaching the oil tank. A vent is provided, such that the excess seal and barrier gases can be escape form the seal, insuring a continuous flow.

Dry gas seals are available in a variety of configurations. The "tandem" style is typically applied in process gas service. Tandem seals consist of a primary and secondary seal contained within a single cartridge. During normal operation, the primary seal assumes the sealing task entirely, while the secondary seal acts as a backup. Separate vents for the primary and the secondary seals are provided, with the barrier seal gas being vented by the secondary seal vent. Double gas seals are also utilized, with the seals mounted in a back-to-back configuration. Seal gas flows equally through both seals, with the seal gas leakage from inboard seal flowing into the process gas, while seal gas leakage from the outboard seal flows into a vented cavity, which also insures the venting of the barrier gas.

Important components of seal gas systems are the seal and barrier gas filters. They insure gas cleanliness, which is the most important factor in maintaining the gas free of foreign material. Ingression of such material into the running gap of the seals leads to degrade sealing performance (increased gas leakage) and eventual failure of the seal. Seal gas must be dry and free of particles 3 micron (absolute) or larger.

There are three sources of seal gas contamination:

Good maintenance practices must always be followed. Seal gas filters should be equipped with differential filter transmitters, or switches, that would give a good indication of the filter fouling.  A good seal gas system should always include low point piping drains. The drains have to be monitored and opened on a regularly scheduled basis. Tracking and trending of the differential pressure between the process and seal gases, together with the seal gas flow to the seals are good means to establish performance benchmarks and detect eventual deterioration.

Call to action will go here below